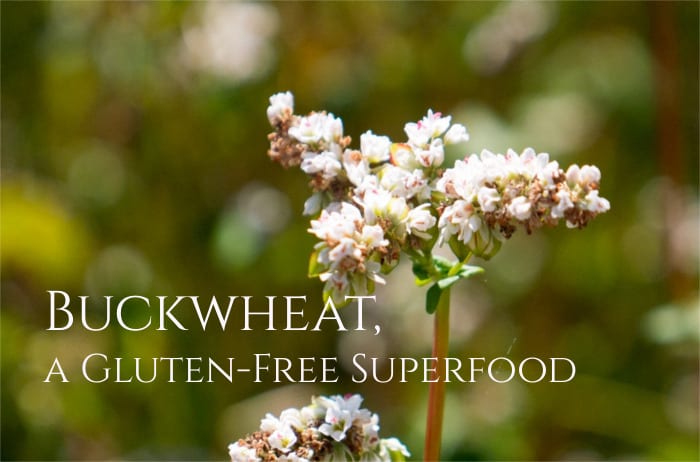 Buckwheat used to be known as a peasant’s meal. It met the basic requirement of filling the stomach, while being easy to grow and full of valuable nutrients. Buckwheat arrived in Europe as a cereal plant by way of introduction from the Mongolians in the 14th century. Today, it shows-up around the world as a gluten-free super-food.

Buckwheat’s (Fagopyrum esculentum) late arrival to Europe meant Hildegard of Bingen missed-out. But, those who track Hildegard Medicine in Germany characterize buckwheat within Hildegard nutrition. Despite its late arrival in Europe, buckwheat has a long tradition in folk and monastic medicine.  And, for modern consumers, buckwheat satisfies those facing the symptoms of gluten intolerance.

What is Buckwheat? A Healthy Grain

Tasty buckwheat sprouts go well with salad, soup, cooked vegetables, or alone as a snack between meals. To start the day inspired by Hildegard nutrition, add buckwheat to spelt muesli. Typically, buckwheat has a slightly bitter flavor profile, with a prominent taste and greyish color.

Yes it is. Despite its name, buckwheat has less to do with wheat grain than other cereals. We consider buckwheat a pseudo grain, with many of the same flavor properties as other grains, without any relationship to wheat or sweet grasses.  Other pseudo grains include ancient super-foods, such as amaranth and quinoa.

Buckwheat is gluten-free and can be used as a substitute for wheat flour to satisfy gluten intolerance.

Lectins are proteins that can enter the bloodstream, bind to red blood cells and thicken the blood. This may increase the risk of circulatory problems, thromboses, strokes and heart attacks. Wheat lectins can also have a negative effect on the bowel by promoting chronic inflammation, irritating intestinal flora, and increased permeability of the intestinal mucosa. Lectins often fall under suspician as a factor in the development of autoimmune conditions.

Buckwheat represents a healthy and tasty alternative to common cereal grains. In contrast to wheat grain, buckwheat may become free of lectins, depending on preparation.  Specifically, germinating (or sprouting buckwheat by soaking in water) reduces or eliminates anti-nutrients.

Uncooked buckwheat contains about 350 calories per 100 grams. This is on a par with quinoa and rice.

Buckwheat is not only free of harmful substances, but also significantly richer in high-quality nutrients and vital substances than ordinary wheat. And, with 11-14 grams of protein per 100 grams, buckwheat is an excellent source of plant protein.

Buckwheat contains all eight of the essential amino acids that the body requires for the production and regeneration of tissue. One of the most important amino acids is lysine. Wheat contains 187 milligrams per 100 grams. Buckwheat, on the other hand, contains an impressive 499 milligrams of lysine. Other amino acids present in buckwheat include isoleucine, leucine, cysteine, tyrosine, alanine, glycine, histidine, serine and glutamic acid.

Buckwheat is also considered a great food for diabetics, because it contains the substance D-Chiro-Inositol, which helps regulate blood sugar levels. Buckwheat supports the process for treating diabetes by assisting with insulin signaling, resulting in less insulin resistance, and lower blood sugar and insulin levels.

We think of the importance of balance and moderation for Hildegard nutrition.  Ultimately, balanced insulin levels reduce the risk of diabetes-related health conditions. Studies indicate that a diet including buckwheat represents a safe, easy and inexpensive way to lower blood sugar levels and reduce the risk of diabetes-related conditions such as heart, nerve, and kidney problems.

The same active ingredient, rutin, prevents veins from losing elasticity and prevents varicose veins from forming. Those who suffer from hemorrhoids also benefit from the regular consumption of buckwheat.

Buckwheat contributes against mild vein problems. Certain secondary plant substances found in buckwheat have a positive effect on the blood vessels. These flavonoids help to seal the vessel walls and improve blood circulation in the smallest blood vessels (capillaries).

Buckwheat tea is a folk remedy to prevent circulatory problems and varicose veins.

Lecithin is also an important nutrient for liver cells. In the absence of lecithin in food, liver cells no longer work at capacity and cannot perform their main task of detoxifying the body. Buckwheat contributes to keeping the liver healthy and efficient.

A hectic lifestyle, bad and unbalanced nutrition, medication as well as daily stimulants all contribute to exhausting the liver. When the liver falters, the body fails to detoxify. Here too, the lecithin contained in buckwheat contributes to positive outcomes.

The process of inflammation in our organs leads to declining health, including broader issues like the development of arthrosis and other conditions. Buckwheat sprouts contain lecithin and easily digestible vitamins, minerals, and trace elements to help fight inflammation.

Among other things, phospholipids have an anesthetic and mood-lifting effect. They also protect against mental exhaustion.

We are most familiar serving buckwheat cooked as pancakes, a warm side dish, an addition to roast meats, or baked as an ingredient in bread. Buckwheat does not need to be cooked right away.  As a seed that sprouts quickly and easily, it can be stored in an unaltered state for months or years. Once exposed to water, buckwheat quickly develops into a seedling and soon afterwards into a plant.

Buckwheat contains all vitamins of the B-complex (except B12), magnesium, manganese and selenium as well as many other health-promoting substances. Bioflavonoids and the coenzyme Q10 are found in many anti-aging creams and can be naturally supplied to the body with buckwheat.

Buckwheat sprouts are more versatile in the kitchen than dry, unsprouted kernels. The sprouts mix well into breads, burgers and other cooked foods. They can also be eaten raw to fully enjoy its vital properties. Buckwheat sprouts go well with salads, mueslis, desserts, or as a snack, all alone.

How to Sprout Buckwheat

It is important to maintain excellent hygiene while working with seedlings. Otherwise, germs may colonize and lead to gastrointestinal issues. Combine the desired amount of buckwheat and two to three times the amount of water in a bowl at room temperature.

Stir the mixture well so that no buckwheat grains remain on the water surface. Soak the buckwheat for about an hour. While you want to give the grains enough time to soak, excessive soaking can prevent the germination process.

While Sprouting Buckwheat Rinse Off Frequently with Water

Use a fine sieve to drain the water and allow the buckwheat to sand for a while. Rinse with cold water two to three times a day for two days. After some point you will notice a sticky substance on the buckwheat – this is starch. Be sure to rinse the starch away thoroughly.

Buckwheat Sprouts Can Be Eaten Raw or Processed

First you will see a small brown dot on the buckwheat grains. A small sprout will soon sprout from that point. The sprouts can be eaten raw or used in food. Buckwheat sprouts are also available dried in organic shops.

The sprouts have the highest nutrient content when raw. They taste good in fresh salads, as an addition to muesli or because of their sweet taste also with desserts. They can also be added to vegetable dishes. You can incorporate them in bread dough or in pasta dough. Buckwheat is also an ideal and interesting addition to sauces and game dishes.

For Which Food can Buckwheat be Used?

Not only traditional pastries such as pancakes, breads, biscuits, muffins, waffles and cakes can be made with buckwheat flour:

Peeled and roasted, they taste slightly nutty and can be used, as an ingredient in salads, mueslis or desserts. Peeled and cooked, buckwheat grains assume a similarly soft consistency to rice, couscous or bulgur and can be processed into a wide variety of stews, soups, casseroles, salads and even risotto or sushi.

Buckwheat Flour in the Kitchen

The main characteristic of bread and cake is the loose yet stable dough, for which gluten, for example in wheat flour, is responsible. This is a mixture of proteins contained in the seeds of some grains (e.g. wheat, rye and to a lesser extent in spelt). If wheat, rye or spelt flour is mixed with water, the proteins combine to form an elastic net and become a kind of gluten. This glueprevents the bread or cake from falling into crumbs, encloses the many small gas bubbles that form during the baking process and provides the bread or cake with a spongy, fluffy structure.

Buckwheat is gluten-free, so buckwheat flour does not produce a stable dough, unless used in combination with classic grain flours, adding soy flour or bean gum to the dough or for cakes, use more eggs.

The seed shells of buckwheat fruits contain a substance that can make the skin more sensitive to light. It is called fagopyrin. When buckwheat is used as food, the peeled form works best.

For a tea, use dried buckwheat herb, harvested before the buckwheat blossoms. 1 tablespoon buckwheat (Fagopyri herba) to 250 ml water. Pour the boiling water over the herb, leave to stand for 15 minutes and strain. Buckwheat tea can be bought in tea bags these days.

A 4-8 week cure with 2-3 cups daily drunk, strengthens veins and capillaries, promotes blood circulation and helps against varicose veins. The first positive effects can be noticed after the first 2 weeks. Can be used a a mild calming tea as well.