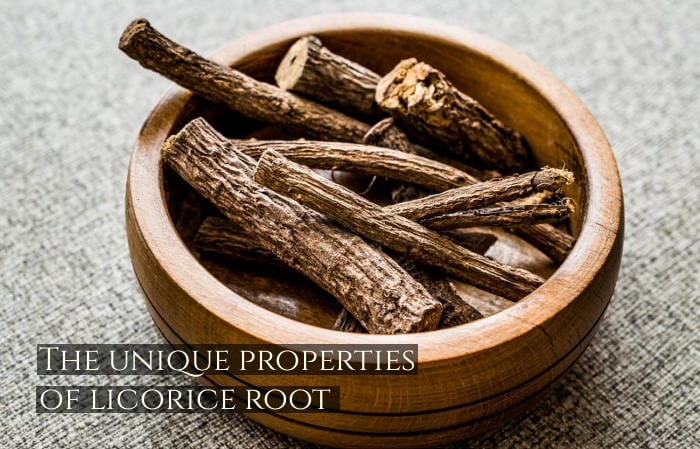 Licorice (Glycyrrhiza Glabra) is a perennial legume herb native to southern Europe and parts of Asia. You are probably familiar with the flavor of licorice – or liquorice. But what you might not know is that the health benefits of licorice root go back thousands of years.

Modern licorice got its name from the Greek word glukurrhiza. Dioscordes (40 AD – 90 AD), the ancient Greek physician and Botanist, named the herb Glukus, or “sweet” and rhiza, or “root.” He included licorice root in his De Materia Medica, a pharmacopeia that would be widely used for over 1,500 years.

In 2012, licorice was named the “medicinal plant of the year” by the Study Group for Herbal Research at the University of Würzburg, Germany. The scientists at Würzburg selected the plant together with experts from the German environmental foundation, World Wide Fund for Nature (WWF). In Germany, the WWF serves to spearhead the conservation and sustainable harvest of medicinal plant species.

Heritage of the Health Benefits of Licorice Root

Licorice is primarily grown in central and southeastern Asia. Licorice roots are densely packed with complex chemical compounds that give it the sweet, familiar taste as well as its many healing properties.

While most of our experience with licorice is in the form of sweets, most candies, however, contain little or no actual licorice extract. Instead, most candies contain forms of anise seed oil. In fact, anise, star anise, and fennel all have flavor similar to licorice but none of these herbs are actually botanically related.

In pre-modern medicine, licorice was one of the most widely used natural medicines. Licorice plays an important role in traditional Chinese medicine, Traditional German Medicine, and Ayurvedic medicine. Pliny the Elder, whose work resulted in the first known pharmacopeia, recognized the healing power of licorice in his work. In addition, our namesake Hildegard of Bingen incorporated licorice into her healing tradition.

When Napoleon pressed his stomach…

We’ve come to think of pre-modern medicine as a collection of home remedies based on extensive practice in tradition. We often overlook the centuries of informal clinical studies related to early medical healing. In the case of the health benefits of licorice root, we have early medical records and anecdotal accounts of historical figures like Napoleon. He reportedly carried it to improve the mild symptoms related to his gastritis.

Today, microbiologists at the Institute for Medical Microbiology in Kiel, Germany have evaluated the positive effects of licorice on neutralizing and preventing Helicobacter pylori from attaching to the walls of the stomach. H.Pylori is a common type of bacteria that found in the digestive tract. When the gut is out of balance, H.Pylori has the tendency to attach to the walls of the stomach. This can cause serious damage, including ulcers. Licorice could prove to be instrumental in preventing and healing ulcers and other conditions due to the inflammatory response caused by bacteria.

A Nobel Prize for Licorice in Ulcers

For decades, scientists believed that excessive digestive acids breaking down the cells of the stomach lining were the principle cause of stomach ulcers. But in 1982 researchers first discovered that helicobacter pylori bacteria caused inflammation and even peptic ulcers. The initial claims of the researchers were cause for ridicule within the medical community. Further studies, however, would cement their findings and vindicate the researchers as they were awarded the Nobel Prize in Physiology or Medicine in 2005.

The health benefits of licorice root include anti-inflammatory properties. Licorice root also stimulates mucus production in the stomach. These soothing properties are why licorice can be an effective natural treatment and preventative therapy for mild forms of gastritis and gastric ulcers.

Of course, the health benefits of licorice root can only come from sources of actual licorice. Fortunately, licorice products are widely available in pharmacies and health food stores in a variety of forms. Keep in mind that the licorice products found in pharmacies and health food stores (including licorice roots, extracts, teas, and elixirs) may contain concentrated amounts of licorice. In these cases, be sure to consume only well-marked products and carefully follow the dosage instructions.

Licorice- A Remedy for Coughs and Hoarseness

The health benefits of licorice root include the relief of mild respiratory issues. In ancient Egypt, licorice was regularly consumed as an expectorant and for throat pain. When combined with hot milk, this sweet root (licorice is estimated to be 50 times sweeter than sugar) becomes an ancient Ayurvedic remedy for treating hoarseness.

Modern medicine supports the healing properties of licorice as an effective anti-inflammatory for soothing mucus membranes in the airways. In addition, a lozenge of medically effective licorice has an emollient-promoting effect insofar as it dissolves tough mucus in the lungs and bronchi.

In addition to traditional medicinal uses for coughs and respiratory inflammation, recent research suggests that licorice can have a dampening affect on the cold and flu viruses as well as other more chronic viruses.

Over the last 20 years, the Japanese have embraced the health benefits of licorice root. The Japanese use licorice root to treat symptoms related to chronic hepatitis C. Modern evidence suggests that regular treatment using licorice root extract (often in the form of injections) serves as anti-inflammatory, antiviral, and antiallergic drug for liver disease, particularly when combined with appropriate treatment.

The antiviral properties of licorice root are well-documented. In 1977 scientists discovered that Glycyrrhizin (licorice root) helps inhibit the effects of herpes simplex viruses. Further research demonstrates the efficacy of licorice root in addressing symptoms related to more serious viruses such as hepatitis, flu, and even HIV and SARS viruses – at least in the test tube. These results are so promising that further studies are now underway worldwide.

Scientists at New York University have established the nuances of Glycyrrhizin (licorice root) as a potential treatment for herpes simplex virus or even the more dangerous HHV-8 virus, associated with HIV.

Glycyrrhizin effectively addresses both active and inactive virus variants. In many cases, the inactive variants pose the greatest risk, due to their dormant nature. For example, the herpes virus often does not produce symptoms in the infected person. If the infected person’s immune system becomes weakened, however, the virus becomes active and symptoms appear (or reappear.)

To be effective, active treatment must address those inactive viral strains that often remain dormant in the body for years. Based on the studies from NYU, that is exactly what Glycyrrhizin may be capable of achieving. However, studies indicate that to be effective, the necessary licorice consumption would exceed levels considered normal (healthy or safe). In addition, researchers only performed these tests on cell cultures, not on human subjects. We look forward to more studies.

Other research is underway exploring the potential health benefits of other active components of licorice root, beyond Glycyrrhizin, including flavonoids. This research includes evaluating the efficacy of licorice in treating symptoms associated with cancer, oxidative stress, and allergies.

So far, the results seem promising. This sweet root, with an ancient history, is beginning to reemerge in modern phytotherapy. As with many other potent healing remedies, we must address the undesirable effects that might accompany the therapeutic properties.

Licorice For (and Against) Fertility

For men who plan to procreate, licorice may not be the best medicinal herb. Licorice is rich in flavonoids, specifically prenylated flavonoids. This category of flavonoid have been associated with estrogenic affects in laboratory studies and significant testosterone reduction in human trials.

In fact, researchers at the Iranian Shahid Beheshti University found that 400 milligrams of Glycyrrhizin may be sufficient to show significant negative testosterone levels in men. Levels of licorice consumption in both human studies we reviewed were well within normal levels, so take caution if you are a man considering using licorice.

For women, on the other hand, a daily dose of licorice may promote procreation, since it stimulates ovulation. In Japan, a traditional fertility treatment includes giving women an herbal mixture of peony and licorice root to help promote fertility. Those same flavonoids that seem to negatively impact testosterone in men, however, may positively impact estrogen levels in women.

For a great way to start enjoying the health benefits of licorice root, try our Licorice tea. Always be cautious not to exceed safe licorice intake. See below to learn more about licorice root use and cautions. Traditional German Medicine  recommends caution using licorice remedies in general, specifically to limit medicinal teas containing licorice to no more than 4 consecutive weeks.

Combine 1/2 Tablespoon of fresh cut licorice root with 1 cup of cold water and bring to boil. Reduce heat and allow the combination to steep for 3-5 minutes. This traditional mixture is recommended for stomach ailments, and respiratory ailments like bronchitis. Take up to 3 – 5 times daily, drinking one cup per sitting.

(2) Licorice Tea for Your Liver

Licorice tea may also be consumed to help strengthen the liver. Combine artichoke leaves with milk thistle seeds, yarrow, fennel seeds, licorice root, and peppermint leaves. Mortar the mixture until well blended into granules. Combine 1 teaspoon of the mixture and with 1 cup of hot water. Allow 7 minutes to steep before drinking. Drink up to 2 – 3 cups daily.

We now know licorice possesses anti-inflammatory properties and promotes relaxation. The main active ingredient, Glycyrrhizin is primarily responsible for the sweet flavor, and the health benefits of licorice root.  When used in combination with some other Hildegard herbs, this licorice tea helps soothe and resolve cramping.  Combine 20 grams of licorice root, 20 grams of chamomile blossoms, 5 grams of peppermint,  with 5 grams of lemon balm leaves, grind and mix.  Boil 1 teaspoon of the herbal mixture with a quart of water, and allow 5 minutes to steep before drinking.

The continuous use of licorice and licorice solutions may cause unwanted side effects. In clinical trials, a dose of 100 milligrams of glycyrrhizic acid daily caused shifts in mineral balances.  Specifically, sodium levels in the body increased with a corresponding decrease in potassium levels. This imbalance in electrolytes can result in water retention, muscle weakness, hypertension, and cardiac arrhythmia.

For this reason, we recommend limiting your consumption of licorice (including tea) for no more than four consecutive weeks. Cardiovascular patients, hypertension patients, and diabetics should only use licorice products in small quantities.

Pregnant women or those who are taking diuretic medication should avoid consuming licorice root altogether. Similarly, those who have had heart transplant surgery or take medications containing Ciclosporin should abstain altogether from licorice. Taiwanese academic research demonstrates a link between licorice in the body and prevention of Ciclosporin.

Healthy people may consume 15 grams of pure licorice per day, when accompanied by a healthy diet and regular activity regimen. But at no time should you consume more than 50 grams per day.