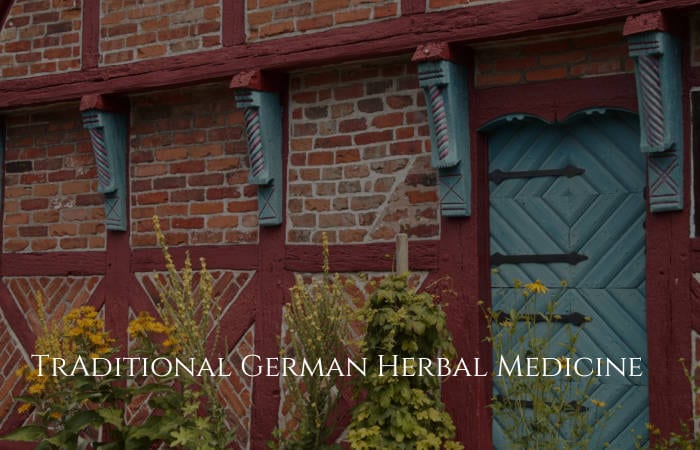 Traditional German Herbal Medicine is a practice and research area championed by modern physicians, pharmacists, and health and wellness practitioners. The practice incorporates various disciplines and practices of natural medicine that have developed over time. These practices include the time‐tested techniques have evolved from klosterheilkunde, folk medicine, and monastic medicine, incorporating herbal medicine, Hildegard of Bingen medicine, homeopathy, and naturopathy.

Traditional German Herbal Medicine is the culmination of modern knowledge, scientific methodology, technology, and substantial historical precedent. It has been established over generations resulting in 5 Modern Tenets of Traditional German Medicine.

German herbal medicine has deep roots in Germanic culture. While the tradition of incorporating natural elements in the treatment of illness existed in most ancient cultures, it was the Germanic people who cultivated these practices into what would become the foundation of modern health and medicine.

The scientific methodology, understanding of the human body, and relationship of mind, body, and spirit that were studied and practiced over the eons resulted in an enormous body of work compiled by some of the most advanced and visionary minds in human history.

The tradition of German herbal medicine was an essential part of life. Not so much medicine as it was a way of living. While many of the practices and natural remedies survived the transition into modern medicine, many more were abandoned, or overlooked.  Commonly, they were replaced by manmade treatments favoring expediency and economic incentives, see Victoria Sweet’s God’s Hotel.

Historical Precedent: how we got here.

The origins of modern herbal healing go back more 2,500 years. The rise of Christianity brought the art and science of healing within the deeply spiritual bounds of the church. The infrastructure, funding, and documentation provided through the organizing powers of Christianity led to enlightenment within the ranks. 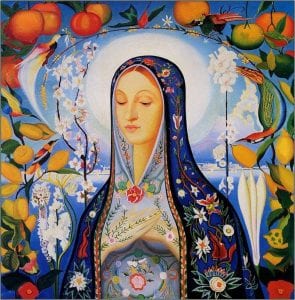 During this time, our namesake, Hildegard of Bingen (1098-­‐1179) authored the nine books of Physica (Natural Science). Hildegard of Bingen was a German nun and polymath.  Hildegard’s writings were not only the first books on herbals  and medicine written by a woman, but were also instrumental in establishing founding principles of nutritional treatment, herbal healing and medieval medical treatments.

Hildegard’s teaching would live on for generations. Her knowledge of natural health and wellness were central tenets of her writings and teachings on holistic wellness.

Natural medicine as a practice was quickly adopted and propagated by the monks. This monastic medicine aggregated expertise from ancient Greek, Roman, and Arabic cultures. As Christianity expanded, knowledge from other cultures was incorporated and natural and herbal healing became the primary focal point of all medicine.

Unlike other cultures that held to superstition or oral histories passed between the anointed few, the monastic practice codified, documented, and tested various practices and their outcomes. An approach that would eventually contribute to the development of scientific methodology as a whole.

German monastic medicine emerged to quickly become the epicenter of natural medicine and remained so for hundreds of years. 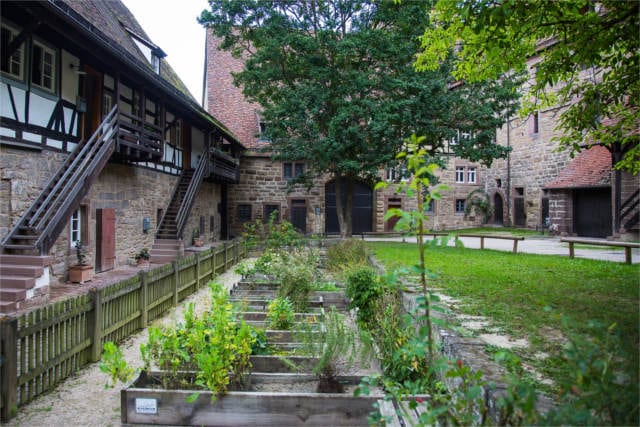 Homeopathy, developed in 1796 by the German physician Samuel Hahnemann, was one of the first adaptations of these ancient practices in modern times. While the “like treats like” doctrine has its limitations, its roots in holistic, natural and herbal remedies, and focus on balance incorporated the central tenants of the ancient herbal traditions.

With the introduction of cellular pathology in the late 1800’s by the “Father of Modern Pathology” German physician Rudolf Virchow and the advent of modern medicine, the holistic concept of natural medicine nearly disappeared as medical science rapidly incorporated emerging disciplines, leaving behind much of the ancient knowledge.

Not all was abandoned, however, as the philosophy and therapies of German herbal medicine continued, carried by tradition and community-based practices to the point of becoming a distinct profession in Germany in the mid-1800s.

Naturopathy or naturopathic medicine is a form of alternative medicine employing a wide array of natural treatments, including homeopathy, herbalism, and acupuncture, as well as diet and lifestyle counseling.

Naturopaths favor a holistic approach with non-invasive treatment and generally avoid the use of surgery and drugs unless urgent intervention is required. Naturopathic philosophy is based on a belief in vitalism and self‐healing.

Germany was not only the principal origin of herbal and natural healing on a community level, but it remains to be the world leader in mass-market (beyond “folk”) german herbal medicine and traditional wellness practices. 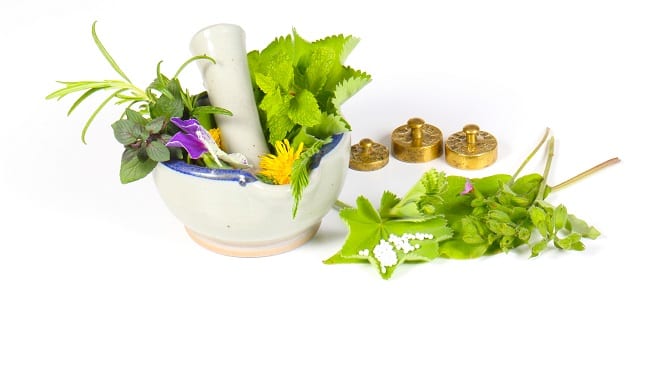 Traditional German herbal medicine and modern science are converging in efforts such as the cutting­‐edge herbal research currently underway at the University of Würzburg, Germany to re‐visit the therapeutic qualities of herbs common within the ancient herbal healing practices.

Currently in Germany, 600 to 700 plant­‐based medicines are available and are prescribed by some 70% of German physicians. This therapeutic use of herbs is a longstanding tradition in Germany. A 1901 law, reaffirmed in 1961, allows for the sale of german herbal medicine as drugs, giving them special status as medicinal agents, a unique situation when compared with other countries. Hopefully, this will not be the case for long.

Throughout the 20th century herbs sold with the intent of curing, alleviating or preventing disease or symptoms of illness have been allowed in the German market as drugs.

In 1976, Germany passed a law that required all medicines then on the market (including conventional drugs) to be reviewed by scientific committees. In 1978, they established a special committee on herbal remedies called the Commission E.

No such equivalent exists within the regulating agencies of the U.S.A.

Due to the longstanding tradition of herbal medicine and the advanced research-oriented regulatory environment, German herbal products make up a significant proportion of the global herbal market.

Researchers and medical practitioners regularly turn to Germany for scientific information on herbs, including medicinal plants common to North America. Much of the scientific data relating to chemical, pharmacological and clinical studies on herbs comes directly from German research.

With the global interest in herbal medicine rapidly expanding, the Commission E monographs established by the German government’s counterpart to the U.S. Food and Drug Administration: the German Federal Institute for Drugs and Medical Devices, are being used as the foundation for other regulatory and monograph systems emerging in Europe and around the world.

The European Scientific Cooperative on Phytotherapy uses the monographs as the basis for review of scientifically accepted uses of herbal medicine throughout the European Union.

The World Health Organization draws on the Commission E’s work to develop a new series of herbal monographs that help regulatory agencies worldwide develop guidance for their own drug regulations.

While modern medicine has improved our lives in many ways, we believe that there is still much more to be learned from the past, that re-connecting with the natural world is essential. Our bodies and spirits share an intrinsic connection to this world that needs to be kindled – perhaps now more than any other time in history.

Our relationship with the natural world remains to be a driving force in our health and wellness; despite all the ways that modernity works to insulate us from it.

We don’t need to list all of the failings of modern health practices and lifestyles. If you are reading this, you already know there are limitations, hidden costs, and outright threats to our health as a result of modern diet, lifestyles, and medical care. 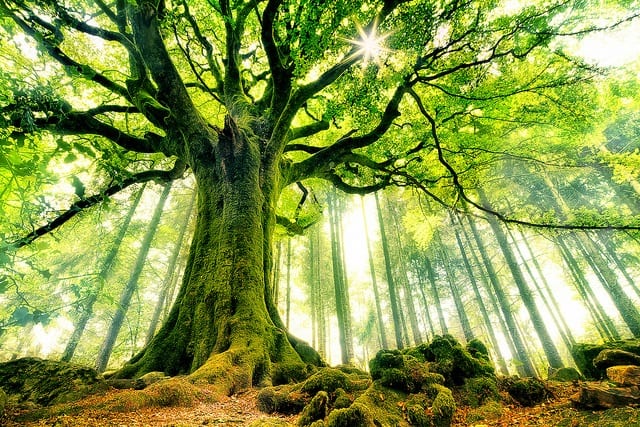 Where do we go from here?

So we focus on the positive. There is a groundswell happening right now, driven by people who are taking responsibility for their wellness, who have been inspired through hardship or love to better their lives and the lives of their families.

The same technology and abundance of information that is part of the problem can be utilized to give us deep insight into the ways of the past, the products and practices from across the globe, as well as a glimpse of the future possibilities.

Modern medicine’s over­‐reliance on pharmaceuticals and myopic, disjointed treatment approach is forcing people to look for different ways to manage their lives and their health.